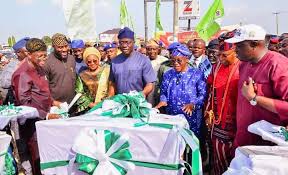 Gov. Gboyega Oyetola of Osun and his Oyo State counterpart, Gov. Seyii Makinde, on Thursday inaugurated the reconstruction and rehabilitation of the 84.6km Osogbo -Iwo-Ibadan Road,  valued at N24 billion.

Speaking at the ceremony, Oyetola said that the road was one of the internal roads of the Old Oyo State that linked Ibadan, the Oyo State capital, with Osogbo, the Osun capital, via different towns and villages, including the ancient town of Iwo.

Oyetola, who commended Makinde for putting aside their political differences to collaborate with the Osun government, said the project would further entrench regional integration.

He said the road from the Osun side, measuring 55km, would cost N 11.3 billion.

“This road project will no doubt further boost the socioeconomic activities of our dear state, especially because it is an addition to the massive road networks our administration had unleashed on the state.

“It is our hope that the immediate benefitting towns and other parts of the state will take advantage of the road for personal economic gains.

“It is our hope that the immediate benefitting towns and other parts of the state will take advantage of the road for personal economic gains”, he said.

In his remarks, Makinde said the Oyo State Government would spend N 12.5 billion for the reconstruction of its portion of the road.

The governor, who described the collaboration of the two states as a revolution, said it would bring new ways of doing things.

“The revolution we are leading is a revolution of thoughts and ideas.

“We are saying governance must always trump politics.

“Despite all these differences, myself and my brother have accomplished things that people from the same party were unable to do.

“This is the revolution we are talking about”, he said.