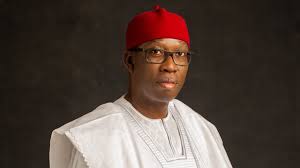 Gov. Ifeanyi Okowa of Delta says the state government has earmarked N111.4 billion for the Ministry of Works to undertake infrastructural development in 2023.

Okowa disclosed this when he presented the state’s 2023 budget of N561.8 billion to the House of Assembly on Thursday in Asaba.

He said that his administration’s commitment to infrastructural development was unwavering.

He said that the projects would be completed before the expiration of the tenure of his administration in May 2023.

Okowa said that the contract for the Ayakoromor Bridge, which was recently repudiated by the government, has been awarded to another contractor.

“The dualisation of Ughelli-Asaba Road (Sectors A and C2) is also expected to be completed next year.

“Coming on stream in the 2023 fiscal year is Okpanam Bypass, linking Okpanam to Benin-Asaba Expressway.

“The Koka Flyover and Interchange, another flagship project of this administration, will be ready for inauguration in January next year. Work on the project was temporarily stalled due to the recent flooding of the underpass,” he said.

Okowa also said that his administration had 883 ongoing and completed roads projects covering a total length of 1,932.14km of roads, drainage channels with a cumulative length of 1,035.95km in the last seven years.

Okowa said that the massive investments in roads and other physical infrastructure had increased opportunities for growth and renewal, employment opportunities, as well as expansion of the retail/informal subsector in the state.

“’Fifteen bridges are currently under construction across the state.

“Among those already completed are the Ovwor/Effurun Bridge, Oha/Orerokpe/Oviore Bridge, Agbarho/Orherhe Bridge, as well as bridges at rail crossing in Boji-Boji Urban.

“Regrettably, we had to repudiate the multi-billion naira contract for the construction of Ayakoromo Bridge in Burutu Local Government Area owing to non-performance by the contractor,” he said.

Okowa noted that his administration was very proud of the network of roads it had constructed in the riverine communities.

“It is an attestation of our belief that every community deserves to share in the prosperity of our commonwealth.

“We have made substantial progress on the Ughelli-Asaba Expressway. Work will be intensified on this strategic road as soon as the rains subside.

“This is one important project we are determined to complete before the end of this administration,” he said.

He also said that the Ogheye Floating Market in Warri North Local Government Area was awaiting inauguration in December.

Okowa said that the construction of the market, which began by the previous administration of Dr Emmanuel Uduaghan, was redesigned by this administration to be a market hub for the riverine communities.

“The market comprises a 6,000 deck with various facilities, including a banking hall.

“The Ogheye Floating Market joins the league of flagship projects, which include the Stephen Keshi Stadium, the sprawling, ultra-modern Prof. Chike Edozien Central Secretariat Complex built by this administration and the Asaba Film Village and Leisure Park,” he said.

Okowa also said that the concession of the Asaba Airport has put the airport on a stronger footing and transformed it into one of the best airports in Nigeria.

“As at today, the Asaba Airport has moved up from 15th position to the sixth in terms of passenger traffic and it recently won an award as one of the “Best Regional Airports in Africa“.

“’At least 80 per cent of the staff employed by the Concessionaire are the people of the state and as part of its corporate social responsibility the company is providing street lights from Okpanam to Head Bridge.

“The concession exercise was made possible because of the massive investment the government made to upgrade the facilities at the airport,” he added.

Related Topics:DeltaGov. Ifeanyi Okowa
Up Next