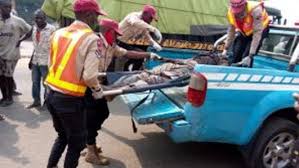 The Osun Sector Commander, Mr Paul Okpe, said this in a statement by his Public Enlightenment Officer, Mrs Agnes Ogungbemi, in Osogbo .

He said that an orange commercial truck with number plate ABG 266XF, lost control while speeding before running off the highway track .

According to him, three persons were in the vehicle with only one person sustaining severe injury while others remained unhurt .

The sector commander further said the trailer was towed off the bridge by the Nigerian Police Force in Ikire Divisional Unit and also obstruction cleared.

He said the injured victim had been taken to a close hospital for further treatment by the FRSC egbeda unit command .

Okpe , however , said the command would not spare anyone found disobeying road traffic regulations when apprehended.

Related Topics:FRSCOsun state
Up Next