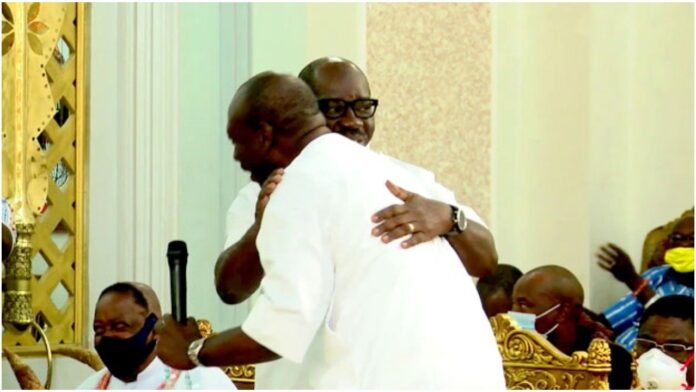 The two leading candidates for the coming governorship election in Edo State, Governor Godwin Obaseki and Pastor Osagie Ize-Iyamu have promised to maintain peace during the election after they both embraced one and other the Oba Benin palace.

Topnewsnajia gathered that Oba of Benin on Wednesday hosted various leaders of the PDP and the APC in Edo at his palace which includes immediate past Governor of the State, Comrade Adams Oshiomhole, his predecessor, John Oyegun, the PDP candidate, Obaseki, the APC flagbearer, Ize-Iyamu, and the State Deputy Governor, Philip Shaibu, among other political actors.

During the meeting, Oba Ewuare II warned the candidates and other stakeholders not turn Edo State to a laughing stock, urging the parties involved to sheath their swords and follow the good example laid down by former President, Goodluck Jonathan.

Oba Ewuare II said, “To me, they (the political actors in Edo) are all one family, and what cannot be resolved when you are all family?

The incumbent governor and PDP candidate, Godwin Obaseki and APC’s flagbearer, Pastor Osagie Ize-Iyamu hugged each after the meeting wit, Oba of Benin, as both parties promised a violent free election.

Obaseki promised not to shy away from his role as the Chief Security Officer of the State and will do all within his power to protect the life of the citizens of Edo State.

“I want to assure you, Your Majesty, that in my role as the Chief Security Officer of the state, I am doing all I can, all within my possible best to maintain peace and safety in Edo State,” Obaseki told the Oba of Benin.

Pastor Osagie Ize-Iyamu also promised the monarch that his party will begin a sensitisation campaign to their followers on why they need to keep peace.

Ize-Iyamu, on his part, said, “Every campaign we do henceforth, we are going to spend some time to also talk to all of them (party supporters) about the need to keep to the peace, no matter what provocation they might talk about.”