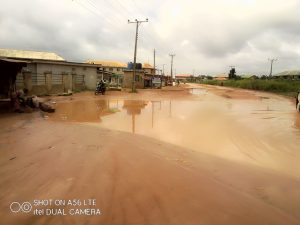 Residents of Igbe, Laara and neighbouring communities in Igbogbo area of Ikorodu on Tuesday appealed to the state government to reconstruct Igbe-Laara link road.

They made the appeal in separate interviews with newsmen in Ikorodu.

They said the state of the road had made movements difficult ,affecting users and residents of Igbe ,Laara and others, negatively.

According to report the motorists plying the road have difficulty going into communities in Igbe Laara and coming out , owing to the deplorable state of the road.

He ,however , urged him to also give attention to Igbe-Laara link road,which he said was begging for attention .

Asela, who is also Chairman, National Block Moulders Association of Nigeria, Igbe Elepe unit,urged Sanwoolu to rescue residents of the affected communities from the untold hardship encountered using the road

According to him, the condition of the road has contributed to the increase in prices of food items as well as transportation fares.

He added that landlords had abandoned their houses and had relocated to other areas as access through the road was difficult.

“Prices of commodities have skyrocketed in our communities now, even transport fare too is another major issue.

“Trucks charge high to convey goods to communities around here because the road is almost impassable .

“We call on the governor to please come to our aid and alleviate our sufferings.

“This is a major road linking many communities;however,some communities have been cut off completely because the road has been overtaken by flood,” he said.

She said the coming of the rainy season had worsened the state of the road,making it impassable.

”The poor state of the road has pushed the prices of everything up.

“We now pay double, and even triple for things because traders say they spend so much on transportation to bring goods to communities,” she said.

Mr Taofik Ajagbe,another resident, also lamented the hardship commuters experienced on the road and urged the state government to intervene without further delay.

He said transport fares had increased by more than 100 per cent because of the state of the road.

“Initially we were paying N100 from Ikorodu bus stop to Igbe Laara, but now People pay between N300 and N500 in the morning and pay between 500 to N700 night.

“If you find yourself coming very late,you either look for a place to stay until the next morning or you pay N1000,” he said.

Mr Musibau Yusuf, a tricycle rider, called on the local government to do some
palliative work on the road pending state government’s intervention.

He said palliative work on the road and a good drainage system would make the road at least passable and give relief to users.

“I do repair on my tricycle everyday two days and wash it due to the bad road, even we that work on the road suffer a lot just as commuters,” he said