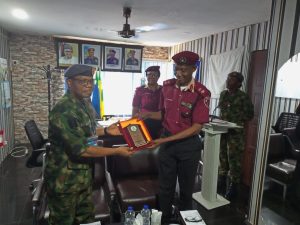 The Federal Road Safety Corps, Oyo State Command, has requested  for the collaboration of the Nigerian Air Force, to reduce road crashes before, during and after the ember months.
The FRSC Sector Commander in the state, Joshua Adekanye, made the request during his visit to the 671 Nigerian Air Force detachment, Ibadan.
According to a statement on Wednesday from the Sector Public Education Officer, Paul Okoduwa, the visit was part of FRSC efforts in stemming the tide on road crashes in Oyo State, especially during and after the ember months.
Okoduwa said that the collaboration would assist the corps to accomplish 15 per cent reduction in Road Traffic Crash fatality as enclosed in FRSC 2022 Corporate Strategic Goals.
He said that the sector commander further advocated for close working relationship with the NAF in other areas such as patronage of the FRSC services in production of Nigeria Drivers Licence (NFL), vehicle recovery through the National Vehicle Identification System (NVIS) among others.
In his response, the Commander, 671 Nigerian Air Force detachment, Air Commodore Nasir Folaji, commended the FRSC for its impact on enhancing National Security in Nigeria  in spite of various challenges.
Folaji promised the continued support of the military to the Corps in the areas of capacity building, trainings, special operational collaborations, among other relevant programmes.
He said the support would improve on the existing synergy between the FRSC and Nigerian Air Force for a safer motoring environment.

Related Topics:FRSCNAFOyo state
Up Next