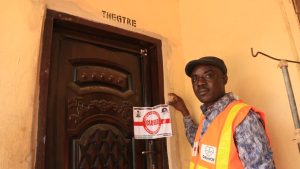 The Cross River Health Taskforce has apprehended Mr Simon Okuta-Agba, an 84 years old alleged fake surgeon in Ukpah, Bekwarra Local Government area (LGA) of the state.
Okuta-Agba, who was apprehended on Jan. 3 when officials of the taskforce raided his facility, Life First Clinic in Bekwarra LGA, carried out surgeries on people even though investigations revealed that he had attended no medical school and was not a doctor.
Disclosing this to newsmen on Sunday in Calabar, Dr. David Ushie, Chairman of the taskforce, said the facility was raided following a tip-off on suspicious deaths in it.
Ushie said the alleged fake surgeon defrauded his victims by giving ridiculous surgery prices to lure them to his facility, where in collaboration with his accomplices, the surgeries were carried out.
“In our investigation, we discovered that he has been running this facility by providing cheap surgeries and nearly every one who went there with medical complaints always had to undergo surgery.
“On this tour, we met a total of 12 patients on admission, out of which 11 of them had undergone surgeries carried out within 4 days from Dec. 31, 2022, the only one remaining had also been scheduled for surgery before we arrived.
“On arrival, we met him conducting surgery on two patients, one a hernia and the other, appendix; these are the diagnosis that he assigns to nearly every patients.
“However, the patients never really get the purported surgery since they adopt skin cuts with suturing while their patients are under anesthesia, the patients wake up with the false belief that they had surgery,” he said.
According to him, Okuta-Agba employed other quacks who ran a laboratory, conducted ultra sound scan; he even had untrained nurses who carried-out sundry activities in a very unhygienic facility.
Ushie, who doubles as a Special Adviser to the Governor of Cross River on Health, said they also observed that every patient kept their used injection syringe and needle by their bedsides which was a professional violation.
He said when the patients were asked why they had used syringes and needles on their beds they said the doctors used the syringes and needles anytime they needed to give them injections.
“It is very sad to know that Okuta-Agba transfuses blood and no body knows how he cross matches the blood, he has no pathologist or doctor that does the confirmation of the safety of the blood.
“Thus far, investigations show that the culprit is not a doctor, has never gone to a medical school to train as a health personnel, has no licence or certificate.
“The same is the case with all his staff that work with him, while Life First Clinic, Ukpah, is not registered with the Cross River Ministry of Health as a health service provider.”
Dr Ushie added that the culprit and others arrested along side with him were arraigned in court by the Department of Public Prosecution in Ogoja on Friday.
The taskforce also closed down five facilities and arrested seven persons from Yala, Ogoja and Bekwarra LGAs, including one Ms Rosemary Irima who operated Divine Favour Clinic and Maternity.

Related Topics:Cross Rivers
Up Next