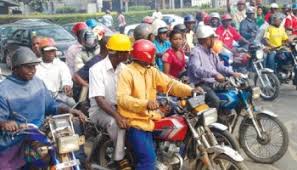 A cross section of them told newsmen , on Monday in Abuja that the planned ban would affect them heavily ”because it is their only source of livelihood.”

Mr Abubakar Mahmud, Chairman, Commercial motorcyclists, in Jikwoyi, told newsmen that the proposed ban of motorcycles would render them unemployed.

He said: ”This is the only business I have that gives me money to sustain my family and if it is banned, my family and I will go hungry.

“That is why we are begging the Federal Government to rescind the idea of banning commercial motorcycles.

“Or in the alternative, the government should provide us with another means of livelihood  so that we can take care of our families before banning the commercial motorcycles.

“ The Federal Government can also  create an enabling environment in the form of soft loans to our members so that the commercial motorcyclists can easily access short term loans.”

This, he said, would enable them to engage themselves in  other petty businesses such as retail trading or to purchase tricycles (Keke) to sustain their families.

Mahmud said commercial motorcycles generate a lot of  employment for millions of Nigerians who were not able to get the ‘white-collar jobs, hence had to resort to riding motorcycles for commercial purposes.

“I am calling on the Federal Government to provide jobs for all of us who use the motorcycle (okada) as business to cater for our families,” Mahmud added.

Mrs Anita Chimaobi, a resident of Jikwoyi who patronises motorcycles for her transportation, said the proposed ban would affect her so much“ because she won’t be able to afford other means of transportation due to their high prices”.

According to her, ”I don’t make sales every day, but I have to go home to meet my family and motorcycles are my most affordable means of transportation.

“Because, I cannot pay for other means of transportations due to their high cost since the increase in the price of fuel.'[

Mr Ekene Ike, another motorcyclist in Karu, expressed dissatisfaction to the proposed ban of commercial motorcycles by the Federal Government and urged the government not to effect the ban.

He said: ”If the Federal Government goes on to effect the ban, I won’t be able to raise money for my education.

”It is through motorcycles that I am earning my living and also paying for my school fees.’’

Ike said that the only way the Federal Government could succeed in this proposed ban of motorcycles without making millions of motorcyclists jobless, was to create more employment opportunities for Nigerians.