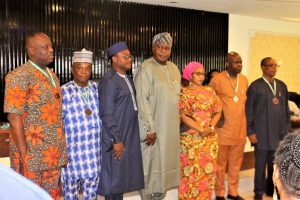 The National Council for Arts and Culture (NCAC), saddled with the responsibility of organising the annual National Festival for Arts and Culture (NAFEST), has inaugurated a Local Organising Committee ( LOC ) to put the event together.
Chief Olusegun Runsewe, Director-General, NCAC during the inauguration
in Lagos, said serving the nation should be considered a greater honour than material possession.
Runsewe in a statement, urged members of the LOC to bring together new ideas and work as a team to add value to the iconic festival.
He said the festival, which had been slated to hold from Nov. 7 to 13 in Lagos, would have events unfolded at the Teslim Balogun Stadium and the National Stadium, Surulere in Lagos.
He said the Lagos and federal governments were working unanimously to ensure a successful festival.
He noted that this was geared towards attracting the attention of the world to the massive socio-economic development of Lagos State and Nigeria in general.
According to him, the involvement of the private sector tourism leadership cannot be over emphasised as they would be seen to market and mobilise stakeholders to the overall benefits of the festival.
Some of the individuals inaugurated in the committee were Mr Nkereweum Onung, National President, Federation of Tourism Associations of Nigeria (FTAN); Mrs Susan Akporiaye, National President, National Association of Nigeria Travel Agencies (NANTA); Mrs Ime Udo of the National Association of Tour Operators (NATOP) and others.