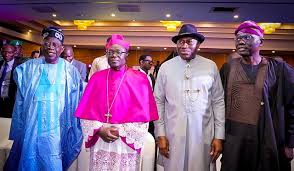 Statesmen, including former President Goodluck Jonathan on Wednesday in Abuja eulogised Bishop Matthew Kukah, Catholic Bishop of Sokoto Diocese, as a man of peace, striving for a better Nigeria.

The leaders spoke at a dinner to celebrate Kukah’s 70th birthday anniversary.

In his remarks, Jonathan described Kukah as a priest, who craved for peace and oneness of Nigeria; who would go to any length to ensure unity and justice.

He noted that no matter the level of his friendship with leaders, Kukah “bashed’’ them when he felt they were not doing the right thing.

According to him, it is not surprising that the theme of the conversation is focusing on what the organisers identified as “Nigeria’s unfinished greatness: Next steps’’.

“Nigeria is indeed a work-in-progress.

“Until that work is done people like Bishop Kukah who God has positioned as the conscience of the nation will continue to be around to constantly hold the mirror of our progression to our national face.

“In the course of the last few years since I left government, I have been involved in the work of promoting democracy, credible elections and peaceful transitions across Africa.

“This is the focus of my Foundation, the Goodluck Jonathan Foundation,’’ he said.

The former president said that from his travels and interactions, he found that experiences and struggles for development were similar in many parts of Africa.

According to him, Nigeria may not be where everyone wants it to be, but everyone should not give up or lose hope by focusing on only the negatives.

“Judging from where we are coming from since independence in 1960, we may have been moving slowly in our journey of nationhood, but it is a journey of progress, all the same.

“Our greatness is still work-in-progress because we have not been able to adequately deploy the enviable human and natural resources that God gave us, to full advantage.

“It is a task we will continue to work on and improve upon,’’ he said.

Jonathan noted that many people, especially youths were becoming increasingly disillusioned about the nation’s politics and its democracy.

“We must remain on the democratic path, however, because it is the only practical way of effectively managing our diversity, developing sustainably and recording progress as a nation.

“The task before all of us is not to lower our guard, lest the democracy we cherish today succumbs to threats and recedes into fascism tomorrow.

“Towards this goal, we are again faced with a good opportunity of choosing our leaders as the nation prepares to go to the polls next year.

“Let us choose those that will take us to the desired destination and the promise land,’’ he stressed.

The former president expressed joy that Nigerian youths are participating actively in the politics of 2023.

He noted that according to the latest figures from INEC, youths constitute the majority of the 96.2 million registered voters.

“That is a good sign. My charge to all youths that have registered ahead of the 2023 elections is to endeavour to walk their talk by making sure they come out to vote on Election Day.

“They should, by all means resist the machinations of unscrupulous politicians who would wish to exploit them by luring them to commit acts of violence or disrupt the process of free and fair elections.

“Our recent experience with the heightened youth interest in politics shows how desirous they are of participating directly in the governance process.

“They now know better not to lend their youthful energy to unpatriotic acts during elections,’’ Jonathan said.

He added that patriotic citizens must contribute through great intellection to guide those running the affairs of state without making their intervention look so adversarial and confrontational.

“A country grows on the hope and fervent aspirations of the citizens.

“We have a country to build and one of the key instruments is to focus on democracy and how to make it thrive and deliver on equity, justice and sustainable development,’’ he stressed.

Jonathan added that Nigerians must stop focusing on negatives, but consider Nigeria as a growing and developing country, which would get things right soon.

He commended Bishop Kukah for winning souls and for always being conscious of the society.

He advised the bishop to ensure that the Kukah Centre worked with governments on national issues, rather than being confrontational.

In another submission, Sokoto State’s Gov. Aminu Tambuwal described Kukah as a man with undying love for the country who believes in the possibility of a new Nigeria, where justice and equity reign.

The governor, who chaired the occasion said, though Kukah’s criticism of the country’s governance had been controversial, it would push Nigeria to come out of failed political leadership.

Tambuwal was represented by former Deputy Speaker of the House of Representatives, Hon. Emeka Ihedioha.

The Chairman, Nigerian Governors’ Forum, Ekiti State’s Gov. Kayode Fayemi, noted in his remarks that the bishop loves to ruffle the feathers of political leaders to steer the country away from the precipice.

According to Fayemi, no past leader has escaped Kukah’s messages, which were not based on hate or rivalry, but suggested to solve lingering issues.

In his comments, presidential candidate of the All Progressives Congress (APC), Asiwaju Bola Tinubu, described Kukah as a great man with a great mind, who loves Nigeria overwhelmingly and never gave up on the country.

Tinubu commended the bishop for his contributions to all sectors of the Nigerian economy which had helped to reshape the nation.

The APC presidential candidate urged Nigerians to emulate Kukah’s legacies of service to humanity, which is the core mandate of human existence.

Tinubu pledged to contribute to the realisation of the Kukah Centre.

In another submission, Monsignor Antonio Guido-Filipazzi, Apostolic Nuncio of Nigeria commended Bishop Kukah for his great works and enjoined him to remain a good priest and servant of God.

The Archbishop of Abuja Dioceses, Ignatius Kaigama, who spoke on behalf of the Conference of Catholic Bishops of Nigeria, said the Conference is proud of Bishop Kukah.

Kaigama said Kukah is a mentor, leader and an asset to the Church and to the nation.

Responding, Kukah thanked God for bringing him this far and promised unending support for the growth of the Church and the country.

He observed that no problem was new under the sun and that Nigeria only needed to equip the people to subdue its challenges.

He said that the Kukah Centre would focus on the development of the youth to enable them to contribute positively to the country.

The bishop thanked all Nigerians for their support calling for more prayers for him and for the country.

According to  reports the event was attended by religious, traditional and political leaders from all walks of life.

Highlight of the celebration was the presentation of cheques and other prizes to some young innovators.

The dinner was organised by Kukah Centre and Greysoft Technologies to raise funds for the building and equipping of the permanent site of the Kukah centre.

It had “Celebrating Nigeria’s greatness: Next Step’’ as its theme.