#BBNaija: ‘Stay Away From Me’, Erica Tells Kiddwaya 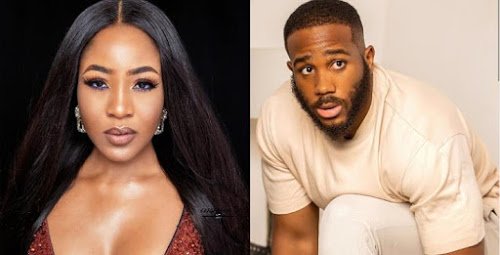 The ‘Kiddrica’ ship is on the verge of sinking after the current head-of-house (HOH), Erica accused his billionaire son boyfriend, Kiddwaya of not always having her back in the public.

TopnewsNaija gathered that Erica while in the garden had an open confrontation with fellow housemate, Wathoni after she stated that she will never chase a man.

However, Wathoni reacting to the topic of discourse asked Kiddwaya f he didn’t chase any girl. Kidd replied saying he doesn’t chase girls.

Kiddwaya’s response got Erica furious as she left the garden with annoyance for the HOH lounge.

While in the HOH Lounge, Erica requested she and Kidd return to being just friends after claiming the 27-year-old never supports her in public.

“What am I even doing with you? I feel very stupid for having anything to do with you in the first place You’re being a hypocrite,” Erica began.

“She tries to throw shades but she never finishes anything. She gossips a lot; she tries to assume every time and then she tries to say stuff to start a drama.

“You also added to it. If I’m with somebody I expect the person to always be on my side. You’re always trying to be safe.

“You don’t always have my back. In private you chat me but in public, you try to sit on the fence.

“Know where you want to stand and stand there is anybody going to beat you? You need to stand for one thing. You saw that she was trying to throw shade at me and you still fell for it.”