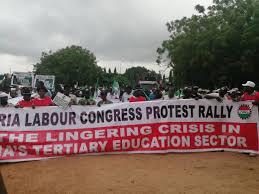 Some parents on Wednesday, called on the Federal Government not to abdicate its responsibility to fund education as the ceaseless strikes de-market the Nigerian universities and certificates.

The parents spoke with newsmen during the National Day of Protest organised by the Nigeria Labour Congress (NLC) on Wednesday in Abuja.

Mr Sam Eze, a parent said the Federal Government had the responsibility to fund education and it should not abdicate that responsibility.

According to him, the excuse for which ASUU has remained on strike is no long tenable; government should sign the renegotiation agreement and implement it as quick as possible.

“It is important for government to fund public education, which is by ensuring that proper infrastructures are put in place in the universities across the country.

“As there are no proper accommodations for the students, no conducive leaning facilities or materials for them to study, among others and now they all at home, this can led to socio vices,’’he said.

Eze, while speaking on the mega protest rally organised by NLC said that the protest was long overdue but that it was commendable.

He added that what the labour had done was to ensure that the Federal Government should take immediate decision on the striking lecturers in our public universities and other tertiary institutions that are on strike.

“Even though the NLC NEC directive to embark on a National protest is coming late, I think the Federal Government has been given another opportunity to redeem itself.

“Also, not just the NLC, other socio forces should join hands with the labour centre to ensure that government funds public education to ensure quality education,” he said.

Also, Mrs Figor Daniel, another parent expressed fear that the Nigerian children might not enjoy quality education in their own country.

“I feel pained that students who are supposed to be in school for the past six months are at home due to the failed agreement reached between the Federal Government and ASUU and other unions in the education sector.

“I have already lost hope and confidence in the Nigerian education system. It is as if my children can never get any quality education in their own country.

“I always wonder what kind of education that my children are receiving in this country and how they can compete with their peers outside this country,’’ she said.

Daniel, therefore, called on NLC to live up to their responsibility of protecting the rights of workers, who were the parents of the children.

She called on NLC to ensure that there was a harmonised salary structure for workers in the public service.

“If there is a harmonised salary structure, we will not be having this kind of situation that we are into today.

“Because most of those parents that are civil servants that government pays heavily, they have since found other alternatives of getting good education for their children whereas we have not been able to.

“Most of them have sent their children to private universities or abroad but for those that cannot afford it lag behind,’’ she said.

She, therefore, called on the Federal Government to do the needful in ensuring that they wake up on their responsibilities.

“I did not any see reasons why the Federal Government would encourage politicians to pay whooping sum of 100 million for just for a form to contest election in a party.

“Rather such monies can be used to put in our education system and these monies are not more than what the striking lecturers are asking for to be put in the university system,’’ she said.

According to him, as a parent, the prolong strike has increase my fears about our educational system; it has also reduce hope for my children.

“It has also made me to feel as if I am not capable to send them abroad to study.

“Right now, so many parents who have the resources have sent their children to countries like Ireland, Canada, among others for quality education.

“That is, away from our failed education system and for the survival of the future of their children, because it appears that the children in Nigeria have no hope,” he said.

Related Topics:ASUUFGNLC protest
Up Next