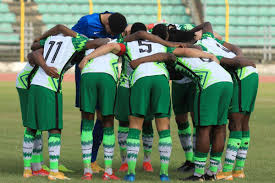 The Super Eagles B team on Friday defied the heavy rainfall in Abuja to train ahead of their African Nations Championship (CHAN) qualifying clash against the Black Galaxies of Ghana.

Newsmen  reports that the Eagles face an uphill battle against Ghana in the second leg of the 2022 CHAN Qualifier at the Moshood Abiola National Stadium, Abuja on Saturday.

Ghana’s Black Galaxies are in the driving seat in the 2022 CHAN final qualifying fixture, after winning 2-0 in the first leg.

The 2-0 win was at the Cape Coast Sports Stadium on Sunday.

The Eagles now have all to do in the second leg on Saturday in Abuja and must score at least three goals without conceding if they hope to qualify.

The winner on aggregate will qualify for Algeria 2023.

Newsmen also reports that all the 25 players took part in the training on Friday under the watchful eyes of Head coach Salisu Yusuf.

Sadiq Abubakar, who picked up an injury in the first leg, looked to have fully recovered ahead of the do-or-die affair against the Eagles’ fiercest West African rivals.

The other assistant coaches who were on ground to put the players through their paces were Kennedy Boboye, Fatai Osho, Abubakar Mohammed and Fidelis Ikechukwu.

The Eagles began the one hour thirty minutes training at the Moshood Abiola National Stadium, Abuja at 6 p.m. and finished at 7. 30 p.m.

Among those who watched the training was Shehu Dikko, NFF’s Second Vice-President and  Chairman of the League Management Committee (LMC), alongside Super Eagles Head Coach, Jose Peseiro.

Dikko charged the players, after the training, to go all out to ensure they win and qualify, adding that the federation was solidly behind the them.

“Let me on unbehalf of the NFF President, Amaju Pinnick who is unavoidably absent, thank you all for your efforts and commitment towards achieving the goal at hand.

“I wish you well and apologise for any deficiency that has happened in the camp. We want to assure you that we are solidly behind you, praying for you and supporting you till the last day.

“I want to remind you all as the Chairman of the LMC, that you guys are representing over 800 players in the Nigeria Professional Football League (NPFL).

“So, you have to do whatever it takes to ensure you recover from the little setback because you are playing for the integrity of your other collegues in this league.

“Mistakes are bound to happen in football, but tomorrow is our game here. Let’s put whatever the issues are behind us and move forward,” he said.

Responding on behalf of his teammates, Tope Olusesi, the CHAN Eagles captain, appreciated the NFF for their support, adding that the team would put in their best to pick the ticket.

“We want to sincerely thank NFF for your support. Indeed it is a big motivation for us as players to see you here today at our final training session.

“Come tomorrow, we promise you that we will give our all and by the grace of God, qualify for the 2022 CHAN finals in Algeria,” he said.

Related Topics:CHANSuper Eagles
Up Next