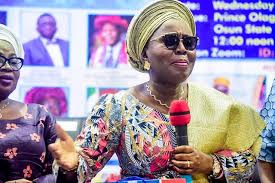 Mrs Betty Anyanwu-Akeredolu, the wife of Ondo State Governor on Monday donated undisclosed cash and food items to three NGOs to enhance their service delivery to humanity in the state.

According to reports the NGOs are Hope Orhanage, Emmanuel World Children’s Foundation, and Breast Cancer Association of Nigeria (BRECAN).

Anyanwu-Akeredolu made the donation at the Foundation for Wives of Ondo State Officials (FOWOSO) post-summit review meeting held on Monday at the Government House in Akure.

Anyanwu-Akeredolu, who donated the funds and food items on behalf of FOWOSO, said that the gesture was to further support the NGOs to carry out their responsibilities.

The wife of the governor explained that Hope Orhanage and Emmanuel World Children’s Foundation were among the awardees in the just-concluded FOWOSO Summit held in the state, saying that the financial backing was for them to continue.

“We found out that we should back it up with some funds to assist them because their own is labour of love, nobody is asking them to do it,” she said.

Anyanwu-Akeredolu, the founder of FOWOSO, described BRECAN as a reliable partner with FOWOSO, saying that the fund was to assist the patient support programme under the association.

According to her, this is to help women with cancer coming for assistance and it will go a long way in supporting their treatment.

The wife of the governor, therefore, frowned at those who gave recognised awards to people and expected money, and urged them to desist from such manner, saying it was rather for them to back it up with money.

“One thing I noticed in the country is when they give award, they expect you to now give them money and it is a terrible system we are in.

“When you recognise people doing things, you back it up, you give them financial backing for them to continue.

“So, we want to change the narrative and this is exactly what obtains in this clime. Because when recognised organisations are doing things on their own, you honor and support them,” she said.

Mr Adaramola Emmanuel, Founder of Emmanuel World Children’s Foundation, who appreciated the wife of the governor for her gesture, said the funds would be used judiciously.

“We want to say a big ‘Thank you ma and FOWOSO’ for counting us worthy. And we promise you that we will definitely, and judiciously use it.

“And for the Emmanuel foundation, the money is going to the building project we are presently doing. We are building a 50 bed capacity strictly for street children for them to sleep and learn vocational skills,” he said.