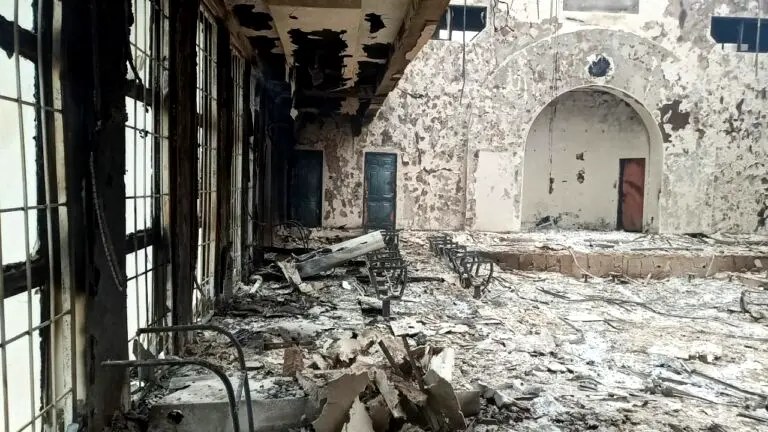 The reported fire outbreak at the Kogi State House of Assembly on Monday may have exposed the internal wrangling occasioned by deep-seated animosity between members of the Kogi Assembly and its leadership.

Feelers are that majority of members of the House are said to be opposed to the various methods being applied in the face off between the state government and Dangote Cement.

The state Commissioner for Information, Kingsley Fanwo had accused Dangote Group as being behind the fire outbreak at the House of Assembly. However, a Political Group, Kogi for Development (KFD) said that the fire incident was the handiwork of the aggrieved political gladiators in the state government.

He (Fanwo) was to later beat a hurried retreat by sending out another statement on the fire incident without mentioning Dangote Cement but simply said investigations are being carried out on the fire outbreak.

Chairman of the KFD, Mr. Steve Ajanah attributed the fire outbreak to the consequence of internal wrangling among members of the House, most of whom are said to be disenchanted with the Speaker and have been making efforts to get him impeached.
He said the Speaker, Matthew Kolawole has been managing the leadership crisis in the House with some members reportedly accusing him of financial misappropriation and highhandedness.

According to him, “the state under the present administration has been a victim of criminal state hijack. Such an outcome is usually a decoy to cover up their tracks. It is a pity that in the 21st Century, such thuggish logic and action of burning of state House of Assembly, owned by the people and for the people is being perpetrated in Kogi State by the government.”

A member of the House who did not want to be named also said, “You will recall that members of the state House of Assembly tried to impeach him in June this year, owing to misconduct and money laundering.”

Recall that at the height of the crisis back in June, Ahmed Mohammed, the deputy speaker, and Bello Abdullahi, the majority leader, had led a move to get the Speaker impeached but both fell to the superior executive intervention and were both suspended by the House.

According to the claims then, the Speaker was alleged to have used the Kogi State House of Assembly account to collect a personal loan running into hundreds of millions of naira to the dismay of members of the House.

The source further added: “Could it be that this is the money he used to build hotels and other businesses in the state while being an elected official? The Speaker has since come out to deny these claims in various publications.

“Could it be that the fire that was set in the chambers of the State House of Assembly could be a ploy by the Speaker to cover his tracks regarding various misappropriations as alleged by members of the House in June this year?”

Recently, the House embarked on series of reviews regarding Certificates of Occupancy (C of O) granted various businesses around the state following allegations that some of businesses did not pay certain taxes to the state.

Part of the sins of the Speaker as being alleged by the disgruntled house members are that there were attempts by him to engage in obscure dealings with these businesses..

“The general opinion in the state is that the fire that was set in the chambers of the State House of Assembly could be a ploy by the speaker to cover his tracks regarding various misappropriations as alleged by members of the House and the recent strong-arm tactics to assert himself as the number one man in the state.

Related Topics:Kogi State
Up Next