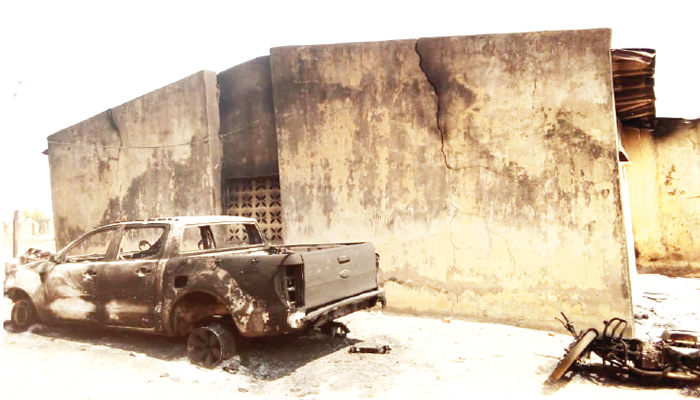 Outraged women and youths on Tuesday set fire to the Kafin-Koro Police Station after a Catholic priest was burned to death in Kafin-Koro, Paikoro Local Government Area, Niger State.

For security considerations, a community member who only wanted to be known as Jonathan stated that around 7 a.m. on Tuesday, members of the Catholic women’s and ECWA organizations gathered on the grounds of the burned-down parish to pray for those responsible for the priest’s lynching.

“As the women were praying, some policemen arrived that they were a detachment from the Kafin-Koro Police Division drafted to the church to provide protection for the praying women.

“The women rejected the protection and requested that the police should leave because the police did not provide protection for the dead priest neither did they show up on time when they were called,” he added.

According to Jonathan, the women flung stones and sachet water at the policeman when they wouldn’t leave the late priest’s home.

“After the prayers, the women were joined by some youths to march peacefully through the major road of the town to the police division, singing anti-police songs to register their grievances, as they asked the police to leave the town since their presence was of no security value to the community.

“As the police were trying to disperse the crowd, the police began shooting into the air and one of the bullets hit a man, who died immediately. That was how the protest turned violent,” he added.

The eyewitness said the irate youths subsequently set the police division on fire.

He said, “On January 17, 2023, around 9am, some angry youths of Kafin-Koro District, Paikoro LGA, mobilised and protested in Kafin-Koro town over the killing of the parish priest, Rev. Fr. Isaac.

Electrician sentenced to life in prison for raping benefactor’s daughter

Six Sentenced To Death By Hanging In Osun