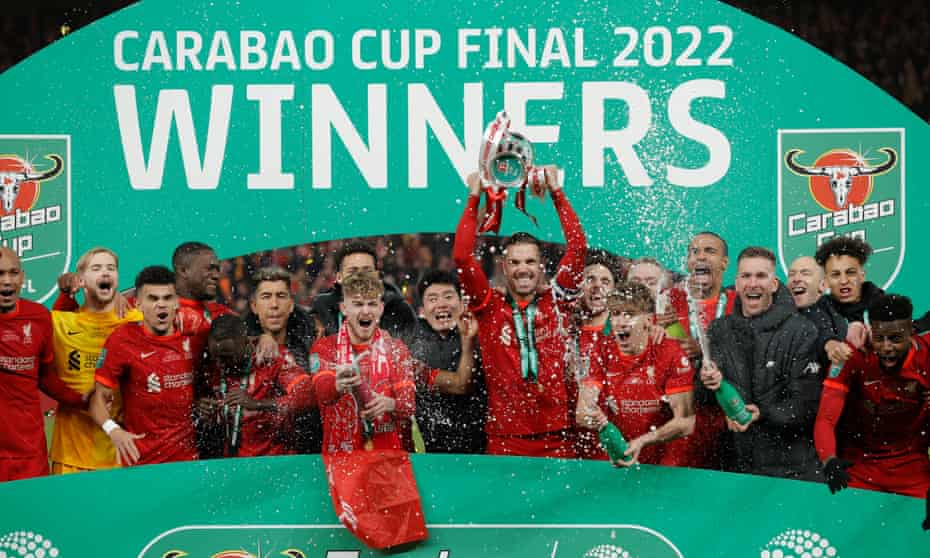 Caoimhin Kelleher won the battle of the second-choice goalkeepers against Chelsea’s Kepa Arrizabalaga as Liverpool won a record ninth League Cup after an incredible penalty kicks shoot-out on Sunday.

The Irishman scored the decisive kick, with his opposite number —- sent on specifically for the shoot-out with two minutes of extra time remaining —- blazing over.

The penalty kicks finished 11-10 after 21 of 22 efforts were perfectly dispatched.

In a thrilling and absorbing final match at Wembley, both sides had goals ruled out for offside in normal time.

Extra time could not settle it and it ultimately came down to the goalkeepers, but not in the way usually imagined in a shoot-out.

Kelleher —- who started after manager Jürgen Klopp kept faith with him for Cup competitions —- was successful from the spot.

Kepa, who had barely touched the ball after coming on, was not.

“I got close to a few, and I forgot I scored the winning penalty kick,” Kelleher said later on. “All the penalty kicks from the lads were class. For me, it was more hit and hope.”

Kelleher had played in every League Cup game bar one this season, and then only because first-choice Alisson Becker needed game time after COVID-19.

He was the hero in the quarter-final penalty kicks shoot-out against Leicester City.

Kepa had similar outings in the Cup competitions but his “live” game time in the final amounted to less than three minutes.

Chelsea manager Thomas Tuchel adopted the policy he had done in the 2020/2021 UEFA Super Cup final match in August by swapping the otherwise excellent Edouard Mendy for the Spaniard.

It barely affected his shot-stopping as virtually all the penalty kicks taken were unstoppable, but could not have helped his rhythm or feel for the occasion.

But disallowed goals and the odd on-pitch confrontation added to the occasion.

Mohamed Salah was making only his third League Cup appearance for the club in nearly five years.

He had lost his previous two appearances against Chelsea in September 2018 and Arsenal in October 2020.

It was also third time lucky for Klopp, who had lost his last two Wembley appearances.

That was in the UEFA Champions League final with Borussia Dortmund and Liverpool in the 2016 League Cup final, when they were beaten by Manchester City on penalty kicks.

As expected Chelsea started without Lukaku, although the withdrawal of midfielder Thiago Alcantara after injury in the warm up was a significant blow to Liverpool.

The midfielder, in tears on the bench, had to be consoled by teammate Alisson at kick-off.

The late change unsurprisingly affected Klopp’s side who, for 15 minutes, appeared to struggle with Chelsea’s front three and left wing-back Cesar Azpilicueta pushing on.

Having got their act together Klopp’s side began to dominate possession —- they had a 10-minute spell where they had the ball 87 per cent of the time.

Mendy got down low to block Naby Keita’s shot before brilliantly getting up to deny Sadio Mane’s close-range follow-up.

Liverpool thought they had taken the lead when Matip nodded home from Mane’s header.

But the video assistant suggested referee Stuart Atwell look at the monitor, and it was chalked off for an offside against Van Dijk, who had blocked Toni Rudiger’s run.

Lukaku had a goal ruled out in the first extra period on a tight-looking offside call and Havertz for one less so in the second.

Commenting on Kelleher, Klopp said: “In professional football, there should be space for sentiment.

“He is a young boy, we ask him to do a lot. He starts playing in the competition and then we get to the final and I tell him he cannot play?

“I am two things, a football manager and a human being.”