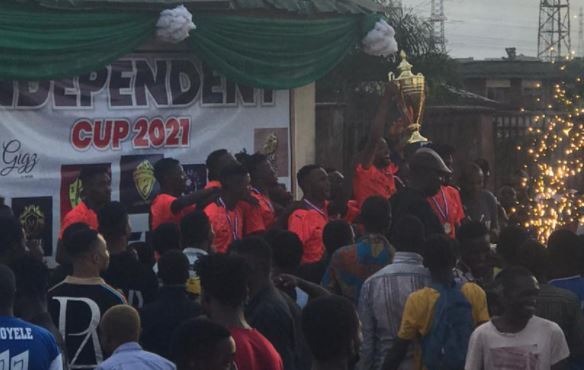 The impressive grassroots tournament saw Ajo All-Stars slug it out with Orphiel FC in the final at Fela field, Ipaja.

The game ended nil-nil after regulations, with spectators treated to fascinating football.

Although Orphiel FC prevailed 5–3 in the shoot-out to emerge the winners of the 2021 Independent Cup, Ajo All-Stars FC was praised for the fight they put up.

Recall that Silas Nwankwo, who just last month was named the Best Player in the Nigeria Professional Football League (NPFL) by the Nigeria Football Federation (NFF), was discovered at the Independent Cup.

Nwankwo was brilliant during the 2020/2021 NPFL season, netting a total of nineteen (19) goals for Nasarawa United, thus emerging as the highest goalscorer. At the 2020 Independent Cup, he finished at the tournament’s top goalscorer, representing HMD FC. This year, he is the sponsor of the top scorer’s gong.

Grassroots football is something that the football community continues to talk about and everyone is in agreement that it is an extremely important part of football in Africa’s most populous nation, Nigeria.

Grassroots is not just about providing top-flight clubs with a steady flow of young talent – it has a purpose that is much more deeply rooted in Nigerian football.

Thousands of young adults and teens play football every week across the country, and the grassroots community is what allows them to do this.

Related Topics:Independence Day
Up Next