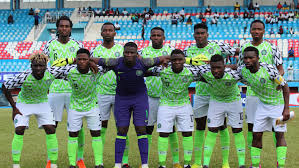 Oyo State Government has commenced mobilisation, ahead of the African Cup of Nations (AFCON) Qualifier match between the U23 National Team and Tanzania, on Saturday in Ibadan.

Commissioner for Youths and Sports, Mr Seun Fakorede, disclosed at a news conference, held at the Nigeria Union of Journalists (NUJ) Press Centre on Wednesday in Ibadan.

According to reports the country’s U23 National Team and Tanzania will hold on Saturday at Lekan Salami Sports Complex in Ibadan.

The team had drawn 1-1 during the first leg of the match, held at Dar es Salam, the capital of Tanzania.

Newmen reports that the sports complex was recently renovated and upgraded to international standard by the Gov. Seyi Makinde-led administration.

Fakorede said that the media engagement was very important due to Saturday’s international match, which never happened in the stadium in the last 30 years.

The commissioner called on all football-loving citizens to come out en masse to witness the epoch-making event and give the U23 Olympic team overwhelming support to victory.

“We call on all football-loving citizens to come out en masse to witness the epoch-making event and give our darling U23 Olympic team an overwhelming and arousing support to victory,” he said.

Fakorede said that part of government’s efforts was to give the sports complex a facelift, after 44 years of neglect by the previous administrations.

He said that the newly-renovated stadium would also open up new opportunities for the people to generate money and enhance value.

“We are here this afternoon to witness yet another milestone in the annals of the Gov. Seyi Makinde-led administration in the state.

“This administration has, thus far, achieved the unprecedented remodeling of the stadium to an enviable world-class international standard,” he said.

The commissioner said that the state would, on Saturday, witness another ‘record-breaking achievement’ in the hosting of U23 AFCON qualifying match.

This, he said, would be happening again after almost 30 years of dearth of international engagements on the soil of the stadium.

Fakorede urged people of the state to cooperate with the officials, urging them to demonstrate patriotism and understanding before, during and after the match.

He said that this would enable the state host more international competitions, soliciting for more cooperation and objectivity from journalists in the state.

The commissioner said that the state would also host the second leg of the U23 team against Costa Rica in November, saying the first leg would hold in U.S.A.

Fakorede said that adequate security had been put in place for a rancour-free match, while accreditation would be handled by the FA, in conjunction with Nigeria Football Federation (NFF).

The state Football Association (FA) Chairman, Oba James Odeniran, appreciated the governor for giving them a stadium that could compare with any other across the world.

Odeniran also commended the commissioner for creating enabling environment for the CAF delegation which accredited the stadium for international matches.

“We are looking beyond the hosting of this first international match. Our efforts and performance will help sustain further patronage of the stadium.

“The essence of the news conference is to solicit the support of our media houses and the public for the victory of our darling U23 national team,” he said.

Also, the state NUJ Chairman, Mr Ademola Babalola, commended the governor for giving the stadium a facelift which had started attracting international matches to the state.

Babalola, who highlighted the various opportunities and benefits inherent in the facelift, assured them of maximum support from journalists in the state.

AFCON Qualifier: Makinde, Others Splash Cash On U23 Eagles To Defeat Tanzania