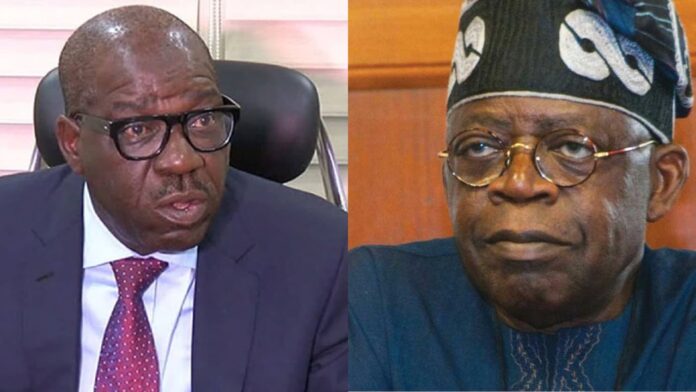 The South-South United People’s Forum in Lagos State (SSPUF) has backed the directive and appeal by the National Leader of the All Progressives Congress (APC), Asiwaju Ahmed Bola Tinubu, to the people of Edo to vote out the incumbent governor, Godwin Obaseki.

In a statement released by its Publicity Secretary in Lagos, Hon. Dr. Paul Fregene, the Forum, under the leadership of Chairman, Engr. Isaac Emiyede, stated that it has to support and follow the directive of Tinubu on the Edo gubernatorial election as the incumbent governor, Godwin Obaseki has defied the principle of democracy.

Emiyede said: “The National Leader of our great party, All Progressive Congress, Asiwaju Bola Ahmed Tinubu (Jagaban Borgu) has made a clarion call on all progressives and indigenes of Edo state to reject the incumbent governor at this coming Saturday’s poll and we are heeding the directive.

“Obaseki has reneged on the principles of democracy. As a result of this, he does not deserve a second term nor enjoys the dividends of democracy.

“It is on record that the APC as a party marketed HE Godwin Obaseki in 2016 but his tenure has been marked and characterized by flaws of democratic anomalies and the State has passed through nothing but hampered development.”

He, however, admonished the people of Edo to shun violence and ensure a peaceful and fair election on Saturday.

The publicity Secretary of SSPUF in Lagos, who also doubles as the Secretary of Ejigbo LCDA, traced the origin of Ancient Benin Empire to Oduduwa, saying the State therefore belongs to the progressives party.

He reiterated that all Edo indigenes must reject Obaseki in order to continue enjoying progressive and infrastructural development in the State.

Fregene claimed that during the tenure of the former governor, Adams Oshiomole, Edo State experienced exponential infrastructural and economic growth.

He, therefore, enjoined the people of Edo State to vote wisely during the election on Saturday.