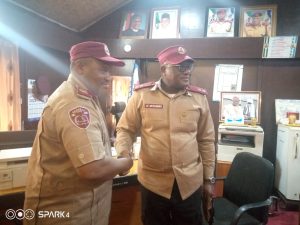 The Federal Road Safety Corps (FRSC), has appointed Mr Garba Lawal, as Acting Sector Commander in Kaduna State.
Lawal who assumed duty on Friday, replaced Mr Hafiz Mohammed, who moves to FRSC Headquarters as Acting Principal Staff Officer to the Corps Marshal.
Mohammed said at a handover ceremony in Kaduna that he  had gone through very challenging period when he assumed duty in 2019 in the heights of road construction works in the state.

“As a road safety manager, it was quite challenging. There was always traffic bottleneck and hold-ups particularly around Maraban Jos, Birnin Yero and Jaji as at then.

“We had to look for solutions on how to manage the traffic to reduce the frequency of the gridlocks and road traffic crashes.

“I could recall a road traffic crash on the bridge at Jaji, where a container fell on a vehicle and people were trapped, that memory remains fresh in me,” he said.

According to him, it was after a road traffic accident at Jaji in which the passengers were burnt to death that the Kaduna State Government donated two fire fighting trucks to the command.

“That prompted the Kaduna government to release two fire fighting trucks to us, and we kept one on Abuja road by Kakau toll gate and the other one at DanKande near Mararaban Jos,” Muhammad said.

He said that as a leader, the best one could do was to plan, motivate and ensure prudent management of human and material resources.
This, he added, was necessary in carrying out assigned duties creditably, to achieve set objectives.

“In the FRSC, yearly we set objectives to achieve based on prevailing conditions or dynamics of the road and also educate the public on the expectations regarding issues happening on the road,” he said.

Muhammed further noted that he would leave the staff as better trained and more disciplined, and appealed to them to support the new sector commander to consolidate on the successes recorded.
He called on motorists to avoid night travels, ensure proper maintenance of their vehicles, avoid overloading and driving in the rain.

“They should also try to rest when going on long journeys and avoid consuming stimulants and drugs,” he added.

In his remarks, the acting sector commander pledged to continue with the policies introduced by the outgoing commander.
Lawal sought the support of all the marshals to achieve all set goals in line with the FRSC mandate.