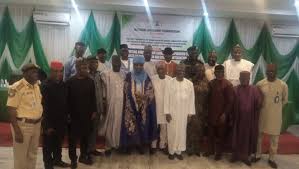 The Federal Government on Wednesday  urged cooperation of communities across the long stretch of the expansive territorial borders for effective policing.
The Director-General of the National Boundary Commission (NBC), Mr Adamu Adaji, made the call in Abuja during a one-day workshop on the establishment of National Consultative Forum for Chairmen of State Boundary Committees of Border States in Nigeria and Border Management Agencies.
The workshop is with theme ‘Converting Borders from Barriers of Separation to Bridges of Cooperation and Regional Integration’ was organised by the National Boundary Commission (NBC).
Adaji  in his address said Nigeria has about 4500km land border and around 850km stretch of maritime border.

“It is a fact that providing effective policing across the long stretch of the expansive territorial borders would require not only the commitment of the combined security operatives but also support of the border communities.

“The National Consultative Forum is the first of its kind and without fear of contradiction, would be a veritable platform for regular engagement between state authorities and national structure responsible for border management and regional authorities in proximate countries.

“However, the engagement with your counterparts in the neighbouring countries would no doubt assist in cross border development initiative that would proffer on the spot solution to some rising security challenges along the borders.

“As envisaged, the establishment of the forum would be followed by the establishment of a similar platform for the traditional and local authorities at the grassroots levels who would be directly responsible for translating the decisions of the Chairmen and Deputy Governors’ Forum into concrete actions.

Speaking, the Executive Secretary of Border Communities Development Agency (BCDA), retired Capt. Junaid Abdullahi said the agency consider is a major stakeholder in the workshop due to its relevance in the actualisation of its mandate.

“We pledge our unflinching support for the desire to transform this fora into an institutional mechanism for the engagement of all border management stakeholders for addressing issues and challenges in the implementation if the AU border governance strategies.

“The harmonisation of our collective effort in the achievement of our individual mandates stands as a guarantee in ensuring greater success,” Abdullahi said.

Newsmen  reports that Abdullahi was represented by the Director of Planning, Intergovernmental and community Relations Department of BCDA, Mr Sadiq Isah.
Similarly, the Comptroller- General, Nigeria Immigration Service (NIS), Idris Gere, was  represented by a Deputy Comptroller General in charge of Border Management, Dr Mohammed Aminu, said the service was delighted to be in the workshop.

“I hope that this forum will provide a veritable platform to deepen understanding and commitment of stakeholders.

“NIS as a family of NBC has remain committed to ensure that harmonious relationship exist among and between the border communities,” Gere said.

Also speaking, the National Security Adviser (NSA), retired Maj.-Gen. Babagana Mongono, represented by Gen. Adamu Laka said one of the problems the country is facing is porous borders.
According to the NSA, the porousness of the country’s border has become a threats to national security.

“Nigerian extensive borders lands and maritime borders continue to be a major source of concern as they are likely porous and inadequately man. This had aided irregular migration and other transnational organised crimes.

“However, the Federal Government would continue to build the resilience of our communities against the risks and hazards that pulls the greatest threat to Nigerian people while reducing our vulnerability,” Mongono said.