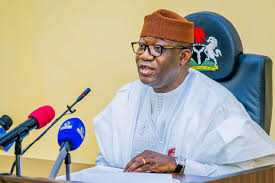 Ekiti Governor Kayode Fayemi has approved the establishment of a livestock farm by indigenes of the state under the aegis of Ekiti Diaspora Forum (EDF).

According to a statement by Femi Odere, a former Senior Special Assistant (Diaspora Affairs) to the Governor,  Fayemi has given his “final nod“ for the setting up of a 250- hectare livestock farm at Irele Ekiti.

The first phase, according to Odere, will be the establishment of a cattle ranch.

The statement said the approval was another testament that the governor Fayemi was not only a “promise keeper“ but a state chief executive whose “passion for the economic development of Ekiti was “sine qua non“.

It said the governor approved the setting up of a Special Purpose Vehicle (SPV), known as EkitiKete Livestock Development Company Limited, in order to bring indigenes of the state who were in the diaspora into the development matrix.

`The initial funding over the three years for the first phase of the project is expected to be N1 billion.

“Also, with this final approval by the governor, the coast is now clear for the company to sign an MOU with Vietnam-Africa Economic Cooperation Alliance (VAECA) which is going to be the company’s technical partner after which work on the project will begin in earnest,” Odere said in the statement.

Apart from the governor, Odere also thanked the Commissioner for Agriculture and Food Security, Dr. Olabode Adetoyi , for also believing in the project.

He said it would have been difficult for the project to come to fruition if they had not been enthusiastic about it.

He said the project was set to play a significant role in the development of the state.

Related Topics:EkitiGovernor Kayode Fayemi
Up Next