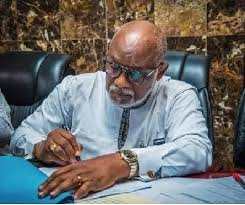 Gov.  Oluwarotimi Akeredolu of Ondo State has signed the Multi-door Courthouse bill into Law, for easier access to justice and align with global trends in alternative dispute resolution

Akeredolu, who signed the bill on Tuesday at the EXCO Chamber of the Governor’s Office, Alagbaka Akure, encouraged the people of the state to explore the alternative that the multi-door courthouse provided.

He explained that the courthouse would further boost the administration of justice and allow litigants to settle matters without going through the conventional court process which, in most cases, created enmity and took longer time to resolve.

Akeredolu disclosed that the law would assist the legal process which had become cumbersome in the country.

The governor particularly charged the judges and other stakeholders in charge of administration of justice to always encourage litigants to make use of out-of-court settlement and explore alternative resolution for the peace and progress of the society.

He observed that it might be difficult for parties involved in cases to become friends again after taking their cases to the conventional courts for adjudication, adding that the newly signed Multi-door Courthouse Law would ensure peace in the society.

“Look at ways of settling matters for them. Make the environment convivial. Don’t let them see themselves as adversaries,” he said.

The governor congratulated the outgoing Chief Judge of the State, Justice Williams Akintoroye, on the signing of the bill into Law during his time.

Akeredolu added that the executive arm of government had enjoyed good working relationship with both the Judiciary and the Legislative arms without rancour.

“I need to note that this bill is being signed into law during your own time. I note, particularly, that this will form part of your preparation to exit the judiciary which is supposed to come up on Friday.

“We will remember today, that Ondo State multi-door courthouse law was signed into law in your own time.

“I use this opportunity to congratulate you for your meritorious service. You have done your very best and we have worked with you without rancour. I want to say we, and I speak on behalf of the legislature, we have enjoyed working with you.

“When we say we have enjoyed working with you, it is not about influence. We have not influenced you. But for us to know that we have a gentleman on the bench who resolves matters without ruffling shoulders,” he said.

He advised the judicial officers to create an enabling and peaceful environment for all litigants to see the need to amicably resolve matters without becoming enemies after the case.

“What the law is set to do is very clear; it is to assist our legal process which has become cumbersome,” the governor added.

Earlier, while presenting the bill fot the governor for assent, the Speaker, Bamidele Oleyelogun, represented by the deputy Speaker, Samuel Aderoboye, said the bill would ease the tension and the burden of judges, lawyers and the state in resolving some cases outside the conventional courtroom.

He added that the law would also bring about confidence and ensure cases were settled within the shortest time.

Justice Williams Akintoroye appreciated the governor for signing the bill into law for the benefit of the poeple and the state.

“As usual Mr Governor has done it again. How do I mean? Just some months ago, Mr Governor signed into law bills, which are Financial Autonomy of the Judiciary, also Ondo State House of Assembly Service Commission and Amotekun Law. We thank you sir for all these.

“The Ondo State Muti-door Court House was given birth before my tenure but there was no law backing it up.

“In having a Muti-door Court House, there we have processes relating to reconciliation.

” We have arbitration, we have conciliation, we have mediation. Now, when we don’t go into litigation on a full structure, possibility of bringing disputants together and make them become friends is available.

“But when you go fully into litigation, somebody will be described as the victor and the other one as the vanquished. At the end of the day the enmity will continue,” he said.

Related Topics:Ondo State
Up Next