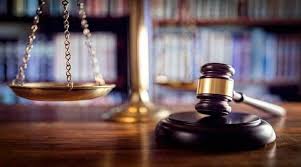 Justice Yusuf Halilu of an FCT high court,  Maitama,  on Wednesday convicted and sentenced a self acclaimed pastor, Esther Oyinabo, to 15 years imprisonment for trafficking a four-day- old baby.

Oyinabo and Oladele were arraigned before the court by the National Agency for the Prohibition of Trafficking in Persons (NAPTIP) on three courts bordering on conspiracy and trafficking in person.

Delivering judgment,  Justice Halilu held that the prosecution has proven its case against the convicts beyond reasonable doubts.

He held that the offence they committed was tantamount to slavery, which is a great crime against humanity.

He, therefore, convicted the defendants as charged by the prosecution.

Counsel for the defendants, Remigius Ani, urged the court to tamper justice with mercy, saying that they are first time offenders.

“The first convict has an aged mother and is the sole breadwinner of his family.

The second convict, he said, is a widow with children to cater for.

The defence counsel, therefore, appealed to the count to impose fines on the convicts instead of sending them to correctional facility to serve terms there.

While sentencing the convicts, the judge held that the law under which they were charged stipulates imprisonment and fine for anyone convicted under it.

Justice Halilu, therefore, both convicts to five years imprisonment with a fine of N2million each on count one.

On count two, the judge sentenced  Oladele to five years imprisonment with another N2million fine, while Oyinabo was sentenced to another five-year on count three with N2million fine.

The sentences, according to the judge, will run concurrently.

Justice Halilu ordered that the convicts serve their term at the Suleja Correctional Centre in Niger.

According to him, the sentence would serve as a deterrent to others with the intention of engaging in human trafficking,.

He added that for anyone wishing to adopt a child, there are many legal ways to do so.

Oladele was alleged to have approached Oyinabo to assist the mother of the baby, from Taraba to pay for her ceasarian operation in the hospital.

NAApTIP said the second convict, Oyinabo, paid N200,000 for the delivery and took  the baby after delivery.

The baby was later given out to a woman from Enugu State.