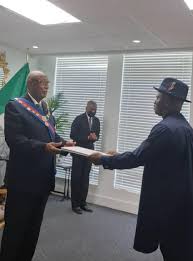 Nigeria’s Ambassador to Cuba, Benaoyagha Okoyen, has presented his Letters of Credence as the non-Resident High Commissioner Extraordinary and Plenipotentiary of the Federal Republic of Nigeria to The Bahamas.

The Bahamas is officially known as the Commonwealth of The Bahamas.

He has concurrent accreditation to Nicaragua, and Honduras.

Okoyen presented the Letters of Credence to Mr Cornelius Smith, the Governor-General of The Bahamas, in Nassau on Wednesday, the Embassy of Nigeria stated on Thursday in Havana.

He thanked Smith for accepting his nomination as High Commissioner-designate and extended the warm greetings of President Muhammadu Buhari to the governor-general and the people of The Bahamas.

Receiving the credentials, Smith congratulated and welcomed Okoyen and wished him success in his responsibilities as Nigeria’s High Commissioner to The Bahamas.

He also extended warm greetings to President Buhari and expressed his government’s desire to move relations between the two countries higher.

After the presentation, Okoyen had a brief meeting with the governor-general, who extended an invitation to President Buhari.

At the meeting, Okoyen expressed commitment to deepen bilateral ties between Nigeria and The Bahamas.

This, he said, included the conclusion of pending cooperation agreements of the Technical Aid Corps (TAC) in Nigeria and promoting new areas in private banking, tourism, trade and investments.

Responding, Mr Cornelius Smith invited Nigeria to participate at the celebration of the 40th anniversary of the establishment of diplomatic relations between the two countries in October.

Amb Benaoyagha Okoyen (L) presenting a gift to the Prime Minister of the Commonwealth of The Bahamas , Honourable Philip DAVIS,(R) after the presentation of the letters of Credence.

Okoyen was also received by Mr Philip Davis, Prime Minister of The Bahamas.

The prime minister assured Okoyen of his support and recalled his meeting with President Buhari in Rwanda and further extended his personal greeting to the President of Nigeria.