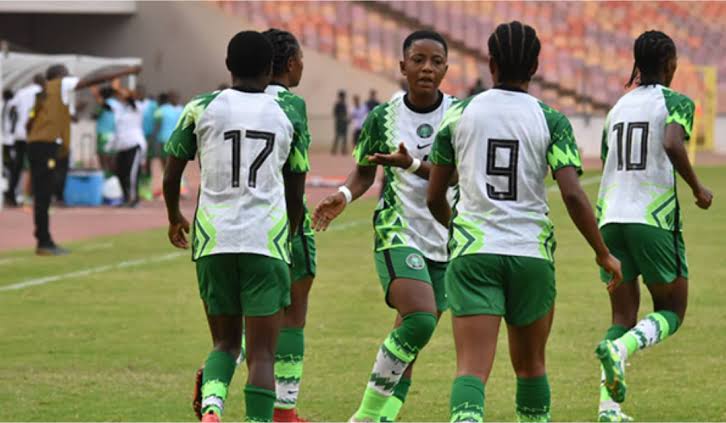 Nigeria’s Under-20 National Women’s Football Team (Falconets) defeated  South Korea 1-0 on Sunday in their Group C Match Day Two of the ongoing FIFA U-20 Women’s World Cup in Costa Rica.
Falconets got a vital boost at the Estadio Alajuela Morera Soto Stadium with the defeat of the South Koreans to reach the knock-out round.
The Falconets also got off to a winning start on Thursday with a 1-0 win over highly-rated France.
However,  the South Koreans shot to the top of the group when they beat Canada 2-0.
Falconets got on a sound footing with excellent passes to the admiration of few spectators but no goal to show for their display in the first half of the match.
They started very well, but their Korean opponents grew into the game, and even hit the post from a free kick but the Nigerian girls held on.
Both teams played almost all their tactics and skills all to no avail in the pursuit of a goal that never came.
The Falconets dominated  possession with 64 per cent as against the South Koreans’ 36 per cent.
Both teams continued from where they stopped with the Falconets dominating  in the second half of the game .
Esther Onyenezide finally scored for the Falconets in the 83rd minute  of the game for the winning goal.

Nigeria will be up agsinst Canada on Aug.19 in their next match.

Newsmen reports that the victory lifted Falconets to the knockout rounds of the World Cup even before a final group game against Canada.
The Falconets were paired in Group C along with France, South Korea  and Canada.
Meanwhile, in another match played earlier in Group D, Japan defeated Ghana 2-0.
The FIFA U-20 Women’s World Cup, which started  on Aug. 10, is expected to end on 28 in Costa Rica

Related Topics:Women's World Cup
Up Next