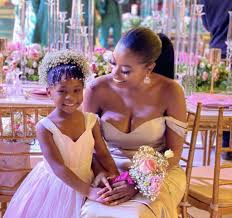 Sophia Momodu, the first babymama of music star, Davido, has slammed a troll who queried her over her motherly skills.

Sophia had shared a video of her daughter, Imade Adeleke struggling to carry two bags.

The troll, who was displeased that Sophia Momodu couldn’t help her with the bags, lashed out at her.

She called the fashion entrepreneur a bad person.

“She is dragging her bag and carrying another at the same time?? U r a bad person Sha”.

Lashing out at her, Sophia stated that Imade loves to have her way.

According to her, sometimes, when she doesn’t want to argue, she allows Imade to do whatever she likes.

Eventually, Imade would see reasons with her.

“And you are silly. Sometimes when I can’t be bothered to argue, I let her do what she insists in doing & she always sees my point almost immediately”.

Months back, Sophia Momodu had thrown a subtle shade at an unknown person for constantly celebrating her daughter.

Sophia Momodu took to her Snapchat page to express her dissatisfaction with seeing her daughter celebrated by someone who harbours ill feelings towards them.

Recalls Sophia Momodu had received praises from Nigerians for being a good mother.

There is no denying that Imade is not only smart but well trained.

Nigerians had also praised the fashion influencer for doing a good job on her daughter after a video surfaced of Imade quering her father.

Davido had taken Imade for a ride on his new Lamborghini and Imade was busy waving at his ecstatic fans.

Noticing that she was the only one doing the greetings, she questioned why her father, Davido was not greeting them.

Davido who was left speechless, had nothing else to say than “I ham” (in Yoruba tone).

Reacting to the video, many hailed Sophia Momodu for raising her daughter well.

Related Topics:DavidoImadeSophia Momodu
Up Next