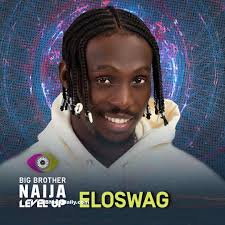 Eloswag, one of the Level 1 housemates of the ongoing reality TV show, was officially crowned on Monday.

He was crowned as the fourth Head of House after the arena games on Monday evening.

Following his emergence, Eloswag was rewarded with immunity from this week’s possible eviction.

Recall that Eloswag was the first HoH in this year’s edition of the show.